This is my first attempt at a Dragon Pipe of this kind, and so I have named it after Drogon from the hit series, Game of Thrones. 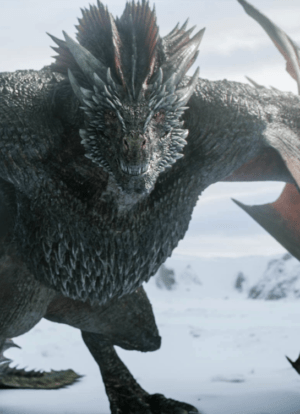 Drogon is one of the three dragons born in the wastelands beyond Lhazar, along with his brothers Rhaegal and Viserion.

He is named after Daenerys’s late husband Khal Drogo.

He can be distinguished by his black and red colored scales and red-black wings. He was also Daenerys’s personal mount.

With the deaths of Viserion and Rhaegal, Drogon is currently the last of his brothers, hence the only known living dragon in existence.

Drogon is noticeably larger than Rhaegal and Viserion. Initially the luck of the draw in terms of biology, Drogon became even larger than them, as they spend over a year chained beneath Meereen while Drogon remained free to hunt and fly at his leisure. Most of his scales are black, shadowing red ones that run down his back and neck. His wings and frills are a black-red mix, down to the wing-bones which are black. His eyes are orange-red. Drogon has grown considerably over the course of seven years, from the size of a kitten to the size of a large whale.

Being a dragon, Drogon has immense physical strength and can spit destructive streams of fire. He can also fly extremely high and at great speeds, more than any other animal. It is implied that physically, he is the strongest of the three dragons. During the Battle of King’s Landing, Drogon’s fire was shown to be strong enough to demolish the city buildings, including the Red Keep, and blasts the city gates.

Drogon is the least shy of the three dragons when it comes to interacting with humans, albeit for the worst. He is by far the most aggressive of the three, easily agitated and quick to anger, as seen when he is a juvenile and he snarled at a Yunkai Wise Master when he approached his mother. Like his brothers, Drogon was trained by their mother to understand the High Valyrian commands, especially “Dracarys” (High Valyrian for Dragonfire), which Daenerys uses to command him to breathe fire on her enemies. He is also the first to react to orders and takes the initiative in confrontations, as seen when Daenerys ordered her dragons to burn Pyat Pree or when the Wise Master threatened her, he was the first to jump to his mother’s defense. He often seeks his mother’s affection and is often seen being caressed by her. However, even she isn’t safe from his anger, as seen when he snarled at her without warning when she tried to defuse a conflict between the three. That said, he is fiercely protective of his mother and will fight viciously in order to defend her, ignoring wounds if needed, as seen when he attacked the Sons of the Harpy in Daznak’s Pit. It appears that he can sense when Daenerys is in danger, and if he does, he will rush to her aid. His larger size also makes him take a dominant role among his siblings, shown in how easily he stole a lamb from Rhaegal and Viserion; they cease their squabble and instead squeal for him to share the lamb with them.

Despite his feral mind, he also possesses a form of empathy, which is shown when he lies next to Daenerys as the latter mourns the fallen Jorah Mormont after the Battle of Winterfell. Drogon also cares greatly for Rhaegal and Viserion, as he roars in anguish when Viserion is killed by the Night King, and furiously avenges Rhaegal’s death during the Battle of King’s Landing by destroying the Iron Fleet and all of the scorpions utilized by enemy forces.

When Drogon discovers his mother’s lifeless body, he is overcome by grief and anger but does not harm her killer. Instead, he burns the Iron Throne with his fire until it is nothing but a puddle of molten slag, destroying the one object that is responsible for countless death and destruction over the past 300 years.

It remains a mystery why Drogon did not avenge Daenerys’s death by killing Jon in return. Normally, Drogon and his brothers would kill anyone who harmed or threatened to harm their mother. Whatever the reason, the fact that Drogon spared Jon suggests that his mind isn’t as bestial as one might think at first glance.