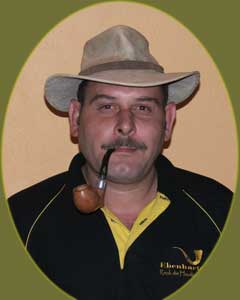 I was surprised at how many systems there are on the market, and that not many of them work as they are intended to. Some have an oil trap, some a collection chamber for the spit, some has a six-millimetre filter, and some a nine. This made me think to create a pipe with everything in it at once, or nothing at all!

It comes in two ranges; the one is metal, and the other a synthetic material that will not wear for the non-metal lovers! Both works with a tapered shank, which might take the sadness out of that easy neck breaks that so easily occurs… Let me tell you about the filtering system. When you smoke, up to 75% of the moisture in your pipe is your own spit. It goes down in the mouthpiece, mixes with the oil, and comes right back into your mouth, not with this system! As the oil goes down, it is first absorbed by the filter which sits inside the spit collector, if it is too much to be absorbed, it simply collects in the spit collector as with some other pipes.

The oil from the tobacco has the same fate; it gets absorbed from the other end of the filter that which is too much gets collected in the oil reservoir! The spit collector can be removed unlike with the other brands, to allow for easy cleaning! If you do not like the spit collector for any unknown reason, it can be removed, and a six-millimeter filter will fit as a nine will do, all too nicely inside the mouthpiece. I am sure that this will be the way to go for systems soon, and that it would not be too long before someone finds a loophole around the patent, but this I promise, nothing will beat this system.

Air is not restricted in any way, and like with all my pipes, smoking is as easy as breathing! O and breathing you might just do for a while longer, for it would definitely keep a whole lot of harmful things away from your body!! This is proof that a pipe should not only look good, it should give the best smoke possible, for that is after all its intended purpose, not so?

In 1930 the Department of Forestry received a request from abroad to do a survey on South African woods as a suitable substitute for Briar. They tested several woods, but came to the conclusion that no wood except for Waboom Protea would suffice. In 1992 I started all over with this survey and found that not nearly all the woods in Africa was tested. Two caught my eye and I started doing some tests on them.

The first is Dalbergia Menoloxolyn, and the second Combretum Imberbi. The first is an almost pitch black wood with a bright yellow outer layer and has the highest density of all woods. This makes it extremely hard and durable, but also quite tricky to work with. When a Briar pipe is smoked constantly, it becomes cloggy very quickly, and a foul taste appears shortly after lighting. This is not the case with Dalbergia for it is too hard and dense for that. A decently designed oil chamber takes care of that, and with the added help of a filtering system, a dry smoke is a certainty. This wood will outlast Briar with at least three times the lifespan. It is, however, a rare and expensive wood, for a solid piece to make a pipe out of is rare.

The second fancy of mine is Combretum Imberbi, nearly as hard as Dalbergia, more readily available, and definitely a whole lot cheaper to buy. This wood has a dark brown colour, which can sometimes appear almost grey. It takes longer to smoke in compared to Dalbergia, which smokes even sweeter than Briar right from the start, but once it is burned in it takes willpower to put it down again!

For now, it is available only in the standard system, and both are used as the bowl for Calabash pipes. There is one downside to both these woods and that is weight, they are much heavier than briar, but if you don’t clench your pipe between your teeth, it should not pose a problem. Otherwise, it is a must have for the collection.

All my pipes have an oil chamber where the shape allows it and takes at least a six-millimeter filter. They all smoke “easy” as so many try to claim their pipes do, therefore I will only explain around the shape and practicality.

Most of my pipes are bent, I do make straight ones too, but I could thus far not find a straight pipe in any make that smokes as good as a bent. For those of you that do not believe in a filtering system which actually absorbs the moisture, take the family saloon or that sports car on a trip without the air filter for a couple of years, and then perhaps you will catch my drift! I will be able to fit the universal system, which takes a six or a nine-millimeter filter to this range, but only on special request.

When I was a child, the best gift ever was a lucky packet! I get the same excitement from working with Briar, for every time there is a new surprise, in the grain that is.

I try working with the best the Mediterranean has to offer and love the smoothness of Corsican Briar.

Because of the high prices of Corsican Briar, I work mostly Spanish Briar, but support me and I will get us some from Corsica! All my pipes are handmade by me with no help, therefore I can guarantee that you will only get the best two hands can offer. I would like to be more artistic in my designs, but supply and demand put me on a basic range.

Each shape has a name, and each name is in Afrikaans, why? Well, this is the only country in the world where it is spoken, and thus more than just a smoking instrument. Every pipe is hand engraved, except if you prefer it differently. The shapes are a basic guideline, and variations might occur, therefore making each one unique. Colours are up to you as well, and basically, the sky is the limit!

My latest favourite is purple, and it shows off the grain extremely good. Each pipe carries a one-year guarantee on the bowl, the definition is that it would not crack or burn. Once a pipe was replaced, there is no further guarantee. No acts of neglect or maliciousness would be considered.

All my pipes have either two or three dots, made of warthog’s teeth (Ivory) and are my grading system. Three is the best I currently have.