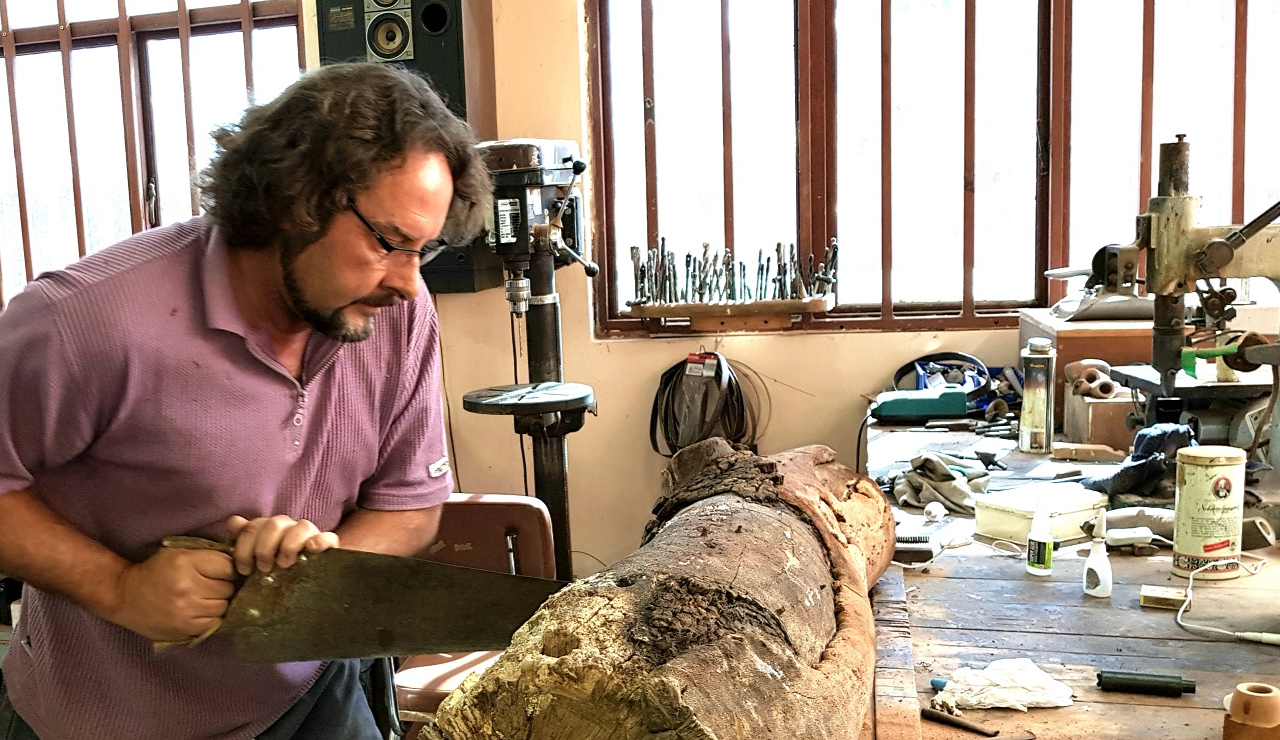 A little about Ebenhart’s Smoking Pipes.

Smoking or Tobacco Pipes have been made for thousands of years.  Most pipe makers follow strict guidelines in terms of shape and form, although these are constantly evolving.

I moved away from those guidelines about 20 years ago to concentrate on the inside of the pipe.  In particular, the airflow, and moisture content, and, of course, the temperature.

My aim was to create a system that smokes dry and cool with unrestricted airflow.  This makes smoking as easy as breathing.

First I created a ‘bottomless’ system.  This places the smoke hole perfectly at the bottom of the bowl.  Even a novice can smoke each bowl down to the last dottle and not waste any tobacco.

Next, I created the Universal System with a spit collector that is easily removed and cleaned and a sump that prevents moisture from mixing with the tobacco.  It also gives you a dry smoke and avoids that bitter bite when the saliva is drawn up through the stem (shank).

All my pipes can accommodate both the standard 6mm and 9mm filters for those who prefer to smoke with a filter.

All my stems are Military Fit, making tenon breaks virtually impossible.  It also makes cleaning, even after a hot smoke, a breeze.

The Reverse Calabash System inspired me to incorporate my Universal System into this, culminating in my Hybrid System.

The Reverse Calabash System has an additional large chamber that allows the smoke to swirl, cool, and dry before being inhaled.

I added a massive air-cooling chamber in the neck of the pipe.

All my stems are made from the ivory of warthog tusks, a first in the pipe world.

They are stronger than anything I had used before and do not oxidize.  The colour doesn’t fade.

Through continuous testing, I found a way to create colours on the stems, which gives an added arty feel to your pipe, something loved by my patrons.

My Gecko Lip Bit, named that because it looks a bit like a gecko’s lip, has a ridge at the end of the stem which makes it easier to grip the pipe in your mouth.

The wood I use (mainly Briar) is always older than 30 years.

I also use selected African Hardwoods including Waboom Protea (Protea Nitida), Leadwood (Combretum Imberbi), and African Blackwood (Dalbergia Menoloxolyn).  All local woods have been used for over 25 years without any problems or bad taste.

I developed my own grading system.  My pipes range from 2-dot to 4-dot, (the best I have at the moment) while always leaving the door open for the ultimate 5-dot pipe.

Lastly, I was trained as a pipe maker by a pipe master, Willie Mattner, and make pipes every day.  I live pipes, and I love it to bits.  I am not a backyard pipe maker nor a hobby maker, I do this for a living and I look forward to making a pipe (or pipes) that is/are perfect for you.

The creation of my own stem material made me realize that I would probably end my innovation career with my Ultimate System, and set off to create it for you…  I took everything I created over the 25 years plus that I have been making pipes, and added a top breathing stem or a lip stem as it is better known, two smoke holes on top of a nicely rounded step distributes smoke in your mouth in such a balanced way that you will not be able to tell where it’s coming from!  This reduces tongue bite and creates back pressure on moisture, keeping more from going into your mouth and lungs (for those who inhale).