Trying to explain my pipes

Over time thousands of people made pipes, following strict guidelines with both shape and the simplicity of a good pipe.  I moved away from those guidelines some 20 years ago, and created a system pipe, now loved by more than 20 000 people over the years… not a whole lot, but enough considering the feedback I get.  I focused on the inside of a pipe, the airflow, the moisture content and of course heat, creating a pipe that smokes dry, cool, and of course airflow that smokes as easy as breathing.  Now, I can add the cost saving feature, where you will be able to smoke right down to the last dottle, even if you are a novice to the world of smoking a pipe because of the perfect placing of the smoke hole.  This is called the “bottomless” feature.

First I created the Universal System, giving you a spit collector that can be removed for easy cleaning, and a sump to prevent the moisture from the tobacco to mix with spit and give you that dry smoke without the bitter bite you always wanted!  I combined that with the ability to use both a 6 or a 9 mm filter in my pipes, for those that prefer to smoke with a filter.  The stems were made as a  Military fit, making tenon breaks impossible, and cleaning even after they were smoked hot a breeze.  The talk of a Reverse Calabash system made me incorporate that into my Universal System, and I called it a Hybrid System, creating a even much cooler smoke because of the massive air cooling chamber in the neck.

The creating of my own stem material made me realise that I would probably end my innovating career with my Ultimate System, and set off to create it for you…  I took everything I created over the 25 years plus that I have been making pipes, and added a top breathing stem, or a lip stem as it are better known, and call it a Gecko lip, for the simple reason that it looks like one, two smoke holes on top of a nicely rounded step distributes smoke in your mouth in such a balanced way that you will not be able to tell where its coming from!  This reduces tongue bite and creates back pressure on moisture, keeping more from going into your mouth and lungs(those that inhale)

The stems themselves are a first in the pipe world.  They are stronger than anything before, and do not oxidise, the colour doesn’t fade and are permanent.  Through continuous testing I found a way to create colours on the stems, which gives an added arty feel to your pipe, something loved by the locals.

The wood I use is older than 30 years at the youngest, and graded with a dot system, two being the lowest grading, and four currently  the highest, all local woods has been used over 25 years without any problems or bad taste.

Lastly I was trained as a pipe maker by a pipe master, Willie Mattner, and make pipes every day, I live pipes, and love it to bits.  I am not a backyard pipe maker or a hobby maker, I do this for a living, so please support me

Notice: There is a lot of new pipes nearly finished! 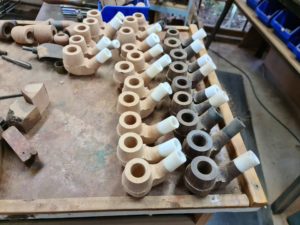 Ebenhart is very busy and nearly finished with a lot of brand new pipes made from African woods and handpicked Briar in various designs, shapes, colours and sizes! Needless to say all his pipes are always extremely good smokers! Watch this space for more information soon!